How Crazy Is Wall Street 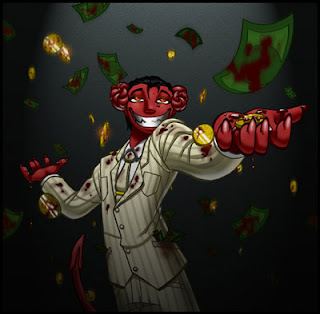 The New York Times published an article on May 14, 2012 concerning the question of whether the rich, from a moral standpoint, are good or bad. The story reported that“A recent study found that 10 percent of people who work on Wall Street are “clinical psychopaths” and that they exhibit an “unparalleled capacity for lying, fabrication, and manipulation.” The vivid term “clinical psychopath” brings to mind the berserk buzz-saw wielding investment banker played by Christian Bale in the film “American Psycho.” Since some 3.9 million people work in the financial services industry, a clinically-diagnosed horde of lunatics numbering almost 400,000 people would certainly be a matter of public concern, though it might only confirm some journalist’s view of American capitalism.


It is fair to ask what is the provenance of this incredible”study.” The New York Times cites its source as a March 12, 2011 story in THIS WEEK, which attributes the psychopath data to an estimate made by free-lance writer Sherree DeCovny in CFA Magazine, in an article entitled “The Financial Psychopath Next Door.” She wrote that “studies conducted by Canadian forensic psychologist Robert Hare indicate that about 1 percent of the general population can be categorized as psychopathic, but the prevalence rate in the financial services industry is 10 percent.” The problem here is that Hare never conducted a clinical study of the financial service industry, and never did a research that 10 percent of its members were psychopaths. John Grohol, the editor of World of Psychology, after the publication of DeCovny’s article, asked Hare about the putative study. Hare told him, “I don’t know who threw out the 10% but it certainly did not come from me or my colleagues.” The closest he came to such a claim was in a research paper he co-authored that analyzed the responses submitted by 203 corporate professionals from seven companies, none of which were on Wall Street. Nor were these 203 people randomly selected . He found that the answers of only eight people– approximately 4 percent of the sample– indicated psychopathic tendencies on a scale he had devised. Even though this was not a clinical study, the responses of these eight people, who might have not even worked in financial services, were transformed via the blogospshere into a supposedly scientific finding noted in one of our most respected newspapers that one-tenth of those working on Wall Street are clinical psychopaths. As Ryan Holiday, author of “Trust Me, I'm Lying: Confessions of a Media Manipulator,” explained to me, "Headline-grabbing trend

manufacturing such as this now dominates the pseudo-news cycle on the Web." Welcome to the Internet, which is not known for its source-checking. Unfortunately It is then only a short leap to the so-called newspaper of record, which is happy to serve up to the public this non-existing study, which like much else that demonizes financiers as a scientific finding. As a result, we now have mad men of Wall Street running amok in the public imagination.
[This is now included in my ebook "Myths of The Media" http://amzn.to/KifIfM

Posted by Edward Jay Epstein at 11:27 AM