Death Of A Witness

On Sunday, October 25th 2009, Jeffry Picower drowned in the swimming pool of his Palm Beach mansion, the victim of an apparent heart attack. His untimely death left in limbo, if not totally silenced, crucial questions about the role he played in what may be the greatest disappearance act in the annals of financial history. Picower was the main (though not the only) conduit through which most of the stolen money in the Madoff Ponzi scheme was systematically siphoned out of the accounts of other investors. As Irving Picard, the court-appointed Trustee, notes in complaint, Picower got "either directly or through the entities he controlled, more than $7.2 billion of other investors’ money." He did not get this money by his good luck, fortunate timing, or random chance. He made regular quarterly withdrawals of the putative profits credited to his accounts. Nor did his profits proceed from his acumen at picking stocks since, as we know by now, all the profits Madoff reported were the result of his invention, not his trading. Picower, a long time associate of Madoff’s, had special access to Madoff’s operation. According to the Trustee’s complaint, he must have been aware that what was going on was highly-irregular since his accounts reported "profitable trading before they were opened or funded; execution of trading instructions that hadn’t yet been given; inexplicable changes in account positions; and – at Picower’s direction – the accomplishment of investment results over time periods that already had expired." In other words, his trades were invented afterwards and back-dated. Unlike other investors, he was advised in advance of Madoff’s monthly profit "targets," or the amounts with which Madoff planned to pad Picower’s accounts, and, through this knowledge, he or his assistant could request higher or lower "profits" for various accounts. Moreover, to amplify Picower’s fictional profits, Madoff extended him so much fictional credit that his accounts had, as the Trustee reports, a "negative net cash balance of approximately $6 billion at the time of Madoff’s arrest." Picower even collaborated in his spectacular, if fictitious, trading success by, as the Trustee notes in the complaint, as he had " specifically directed such fictitious activity." For example, at one point, he faxed Madoff back-dated letters to support fabricated trades. In some of the faked trades, Picower’s reported "profit"s ran as high as 550% . As a result, the Picower was able to withdraw over $2.4 billion just between 2002 and 2008.
Why were such staggering notional profits systematically credited to the Picower accounts? Unless Madoff was channeling a large part of the money he stole to Picower for reasons of friendship or charity, the multi-billion dollar skim must have been part of the scheme itself. If so, was Picower following Madoff’s instructions in re-depositing the $7.2 billion he withdrew? And, if this was part of the exit strategy– and all Ponzi schemes need an exit strategy-- where is that money today? Unfortunately, the answer to these crucial question may have died in the drowning pool along with Picower.
***
Posted by Edward Jay Epstein at 1:05 PM

President Obama’s Nobel Peace Prize has sparked an understandable range of reactions, from surprise and outrage to apologetics for the Nobel Committee’s decision to honor him so prematurely. It’s worth remembering that nominations for the Peace Prize must be received by February 1 of each year, meaning that Obama was nominated less than two weeks after becoming president.
Then again, getting nominated is not difficult. Nominations can be made by, among others, any members of national assemblies and governments; judges on the Inter-Parliamentary Union Permanent Court of Arbitration, the International Court of Justice, or the International Court of Justice; or university professors of history, political science, philosophy, law, or theology. This year saw a record 205 nominations. Unlike the Academy Awards, the Nobel Committee keeps the full list of nominations secret for several years. It was revealed well after the fact, for example, that Hitler, Stalin, and Mussolini received nominations—though in Hitler’s case, before he decided to invade Norway.
Perhaps that’s not so ironic when one recalls that Alfred Nobel was an arms dealer and dynamite inventor. But he specified in his will in 1895 that a five-person Nobel Committee elected by the Norwegian Parliament should award the Peace Prize to “the person who shall have done the most or the best work for fraternity between nations, for the abolition or reduction of standing armies and for the holding and promotion of peace congresses.” Nominations are considered at a meeting attended by permanent advisers to the Nobel Institute, which consists of the Institute’s director and research director and a small number of Norwegian academics with expertise in subject areas relating to the prize. Some nominees have even campaigned for the award during this evaluation period. Oil magnate Armand Hammer spent an estimated $5 million in 1989, for instance, trying to sway the Norwegians’ decision. He made it to the short list, but lost out to the 14th Dalai Lama.
The five-person committee selects the laureate in October. The prize is presented annually in Oslo, in the presence of the king, on December 10, the anniversary of Nobel’s death. In 2009, four out of the five key deciders were women. Though the committee seeks a unanimous decision, the winner may receive a simple majority of three votes.
So considering the Nobel Committee’s inner workings and its history, President Obama’s award is perhaps not so surprising after all.
Posted by Edward Jay Epstein at 12:11 PM

Mystery Of The Arctic Sea 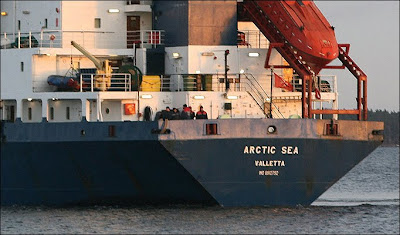 The surfeit of imaginative speculation in the world press about the disappearance and reappearance in the Atlantic of a Maltese cargo ship named the "Arctic Sea," includes even a scenario in The Harvard Crimson – taken no less from a video game– in which a team of masked Israeli Commandos drop out of the sky from a helicopter onto the Arctic Sea, "subdue the crew and remove weapons unlisted on the ship’s manifest." Eye-popping headlines such as "Was Russia's 'Hijacked' Ship Carrying Missiles to the Mideast?" (Time Magazine), "Arctic Sea ghost ship 'was carrying weapons to Iran'" (Daily Telegraph) and "Missing channel pirate ship carried Russian arms for Iran"(Times Of London) floated through the media world but no one could be found who actually claimed to have seen a cargo of missiles or other arms aboard the so-called "ghost ship." Nor was there a scintilla of evidence that it was headed to Iran. What is known to date is that the Arctic Sea is far more prosaic. It is registered in Malta and owned and managed by two Finnish corporations, Arctic Sea Ltd and Solchart Management Ab, which in turn are owned and controlled by Victor Matveev, a Russian citizen. and is manned by a Russian crew. Its last voyage began uneventfully on July 23, 2009, in Jakobstad, Finland. After a routine inspection by Finnish authorities for contraband, it left with a timber cargo on a 2 week trip to Algeria. Its route would take it through the English Channel to the Atlantic and then, via the narrow strait of Gibraltar to the Algerian port of Bejaia, in the Mediterranean. For the first week of the voyage, the ship’s Automatic Identification System sent out signals indicating that it was on its prescribed course. All appeared normal when it made radio contact with British authorities on July 28th as it passed into the Atlantic. But on July 30, its Automatic Identification System stopped sending out its position and the Arctic Sea did not go through the strait of Gibraltar. On August 3rd, Renaissance Insurance Group, the ship’s insurer in Moscow, received an phone call demanding a ransom of 1.5 million Euros.
Meanwhile, Israel got into the act. According to a highly-reliable source close to Mossad, Israel informed Moscow through intelligence channels that it suspected the Arctic Sea was carrying a hidden cargo of missiles and was on a course that could take it to Iran. This warning helped galvanize the Russians into action. The Russian Defense Ministry, after determining that the ship was in the sea lanes off Africa, dispatched the frigate Ladny to pursue it. On August 17th, after finding the Arctic Sea in the Cape Verde Islands, Russian troops boarded it and arrested 8 Russian non-crew members from Estonia and Latvia– six of whom had served time in prison. According to crew members, this gang had hijacked the ship only a day after it left Finland, having allegedly arrived an inflatable motor launch early in the mourning of July 24th. After diverting the ship from its course, the hijackers painted a new name on the ship, "Jon Jin 2" in an apparent attempt to disguise it. According to Russian defense ministry, the subsequent search of the ship did not find missiles or other contraband. In addition, a crew member interviewed by the New York Times confirmed that "There was only lumber on board." He said "I was personally in all areas and in the ballast tanks. There was nothing else in there. I can say this with 100 percent certainty."
If so, why was Israel concerned that the ship might be carrying a secret arms cargo? Such suspicion could well have been triggered by the motor launch that the Russians found concealed under a pile of timber on deck. Presumably, the hijackers planned this vessel for they get away, but such a partially camouflaged object with its pontoons could have be misinterpreted by aerial surveillance as a hidden arms cargo.
The Russian search also found an intriguing discrepancy in the cargo. According to the Russian news service RIA Novosti, the Russians discovered that instead of the 6,000 tons of relatively-valuable hardwood listed on the ship’s manifest there was cheap pine timber. If so, it raises the question: why would a cheap cargo be substituted for an expensive one– unless it was not intended to reach the buyer in Algeria..
A key piece of the puzzle may be the ransom demand the insurer received on August 3rd. Modern pirates typically hijack a ship not for its cargo but to extort a ransom or other payment from its insurer, and the Arctic Sea was heavily insured. According to the security chief of its insurer, Renaissance Insurance Group, the anonymous caller claiming to represent the hijackers threatened to scuttle the ship unless the company paid the 1.5 million Euros. But the caller provided no instructions for paying this money, so apparently the purpose of this call was merely to establish to the insurer that this missing ship was in imminent danger of being sunk. If not for the misguided intelligence about missiles that set off an international search for it, the Arctic Sea might have been quietly disappeared in the Cape Verde Islands, making the insurer liable for insured value of the lost ship and cargo. I
The Russian investigation headed by the celebrated deputy chief prosecutor Alexander Bastrykin is now reportedly examining such issues as to whether the ransom demand was actually made by the captured hijackers, whether there was any complicity by any crew members, and whether there is any connection between this incident and the loss of the Arctic Sea’s sister ship, the MV Teklivka which capsized off Egypt in 2006. Since Bastrykin is now interrogating all the parties involved, the answer may prove less elusive than the missing ship– or its cargo.
Posted by Edward Jay Epstein at 2:19 PM