The DSK Affair: One Year Later 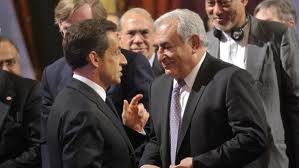 When Dominique Strauss-Kahn stepped out of the shower in his $3,000 a night suite at the Sofitel Hotel in New York one year ago May 14, he was fully on track to become the next President of France. As head of the International Monetary Fund he was now on his way meet German Chancellor Angela Merkel with a secret plan to avert the Greek default. He was nearly 20 points ahead of his rival President Nicolas Sarkozy in the public opinion polls. He had planned to announce his candidacy on June 15th, he told me when I interviewed him last month. He was confident, perhaps overconfident, he could not be stopped, expecting to be nominated by his Socialist Party, and then defeat Sarkozy.

These well-laid plans, as the whole world knows now, went astray moments after he stepped out of the bathroom naked and encountered a statuesque maid. The liaison that followed in the next seven minutes is currently the subject of a civil suite filed by that maid, Nafissatou Diallo, who claims he forced her to twice have oral sex; DSK claims that the sex was offered and consensual.

Four hours later he was arrested at JFK airport(after calling the Sofitel and reporting his location so it could return a missing cell phone.) In their rush to judgment, and after receiving information from an unidentified official in Paris, the prosecutors moved to deny DSK bail before they had gathered critical evidence, including key swipe and cell phone records. As a result, he was paraded before the cameras in a humiliating “perp walk,” imprisoned in the Rikers Island jail for four days, placed on suicide watch, and then put under house arrest for more than a month. By this time, his presidential ambitions had been effectively destroyed.

Only one month after this spectacle, in late June, after the prosecutors got the key swipe records , did it become clear to them that Diallo, the only witness against DSK, had given false testimony under oath to the Grand Jury about the case itself. So the Grand Jury had indicted him on testimony from a single witness that was untrue. The prosecutors found her “credibility cannot stand the most basic evaluation” and that “the nature and number of [Diallo’s] falsehoods leave us unable to credit her version of events beyond a reasonable doubt.” They further concluded that the medical evidence not only did not “prove or corroborate that their encounter was forcible or non-consensual,” but it fails to corroborate certain aspects of [Diallo’s] account.” In an almost unprecedented move in a high profile case, the district attorney dropped all the charges.

When, I met with DSK in Paris this April, he could not easily accept that the destruction of his political career was merely the result of false testimony. By now he had considerable reason to believe that he had been under surveillance by his political opponents. This suspicion is consistent with the conclusion of investigative journalists Didier Hassoux, Christophe Labbé, and Olivia Recasens, who interviewed member of the French intelligence services DCRI for their 2012 book, The President’s Spy. They reports that the DCRI not only had made DSK a target but also set up a “special group” that liased directly with Sarkozy’s Élysée Palace. If so, DSK was likely being watched on his US trip that May. It would then be possible for these operatives, and their superiors in Paris to use whatever happened at the Sofitel to ruin his presidential ambitions.

There certainly were curious happening in that hotel suite, including reported interceptions of his emails, a missing Blackberry phone, and at least one unidentified person using someone else’s key cart to enter his room just prior to his arrival. The suite had also been used for sexual liaisons before he checked in. The police lab analysis of the DNA evidence found precisely where Diallo said the attack occurred, revealing other stains there with DNA from at least seven other “unknown individuals. One stain visible in the carpeting contained a mixture of saliva and semen from three different people. Since no complaint was filed, these were presumable consensual liaisons.

Even if all the mysteries of the presidential suite have not been solved, it is now abundantly clear that if the district attorney’s office had gathered more evidence before they arrested and imprisoned DSK, the outcome of the French election might well have  had a different victor. But DSK’s enemy Sarkozy has not emerged triumph. The ending here is more like a Shakespearean revenge tragedy in which, as the plot unfolds, everyone involved is ruined.


Posted by Edward Jay Epstein at 8:57 AM