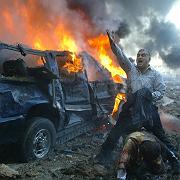 The crime occurred at 12:56 p.m. on Valentine's Day, 2005. Rafik Hariri, the former prime minister of Lebanon, was blown up, along with most of his armored convoy, in front of the Hotel St. Georges in Beirut. The bomb had been packed into a white Mitsubishi van that had been moved into position by a suicide driver one minute and 50 seconds earlier; the powerful explosion tore a seven-foot deep crater into the street and killed 23 people.
The assassination caused an international uproar, and the Lebanese government turned to the United Nations for help. The U.N. Security Council appointed Detlev Mehlis, a German judge renowned for his pursuit of terrorist bombings, to head its investigation.
Now, after five years, indictments are widely believed to be imminent, and the investigation has recently focused on members of Hezbollah, the Iran-backed political and paramilitary terrorist group that has been a significant factor in Lebanon for decades—and whose rocket attacks on Israel precipitated the Lebanon war of 2006. Even the hint that Hezbollah might have been involved in the Hariri assassination threatens to engulf Lebanon in a civil war.
Early in the U.N. investigation, clues seemed to point to a jihadist suicide bomber. Various Islamist terrorists had used similar Mitsubishi vans in a spate of other Beirut bombings. Elements in the bomb traced back to military explosives used by al Qaeda of Iraq. A convenient videotape sent to Al Jazeera television showed a lone suicide bomber named Abu Addas claiming that he acted on behalf of an unknown jihadist group.
But the U.N. investigative team, which included forensic experts in explosives, DNA and telecommunications from 10 countries, found convincing evidence that the assassination was a cleverly disguised, state-sponsored operation. The Mitsubishi van had been stolen in Japan, shipped via the port of Dubai to the Syrian-controlled Bekka Valley where it was modified to carry the bomb, and then, only days before the assassination, driven over a military-controlled highway to Beirut.
One participant in the planning of the attack was Zuhir Ibn Mohamed Said Saddik, a Syrian intelligence operative. Saddik told investigators that the putative bomber, Abu Addas, was a mere decoy who had been induced to go to Syria and make the bogus video, and then was killed. He further alleged that the actual van driver had been recruited under a false flag in Iraq, so presumably if he defected or was captured he would wrongly identify his recruiters as jihadists.

Saddik said that the "special explosives" in the TNT had been intentionally planted there to mislead investigators in the direction of Iraq. Saddik was arrested for his role in the crime in 2005 and was released without reason the following year. He vanished in March 2008 from a Paris suburb.
Meanwhile, the U.N. team uncovered evidence that the actual conspirators had resources and capabilities—including wiretaps of Hariri's phones—that pointed to a state-level intelligence service. U.N. telecommunications analysts determined that eight new telephone numbers and 10 mobile telephones had been used, along with the wire-tapping, to follow Hariri's movements with split-second precision and move the van into place.
In addition, a former Syrian intelligence agent told investigators that he had driven a Syrian military officer on a reconnaissance mission past the St. George Hotel on the day before the bombing, and that the officer told him that four Lebanese generals, in collaboration with Gen. Rustam Ghazali, the head of Syrian intelligence in Lebanon, had provided "money, telephones, cars, walkie-talkies, pagers, weapons, and ID cards" to the alleged assassination team.
Judge Mehlis's report, issued in October 2005, concluded "there is probable cause to believe that the decision to assassinate former Prime Minister, Rafik Hariri, could not have been taken without the approval of top-ranked Syrian security officials, and could not have been further organized without the collusion of their counterparts in the Lebanese security services." Judge Mehlis had the four Lebanese generals arrested in 2005.
When the judge moved to question Syrian officials—including the intelligence chief, Assef Shawkat, who is Syrian President Bashar al-Assad's brother-in law—the Syrians stonewalled and protested the inquest's direction. In January 2006, the U.N. Security Council replaced Judge Mehlis with Serge Brammertz, a 43-year-old Belgian lawyer who had served as deputy prosecutor at the International Criminal Court in The Hague.
Mr. Brammertz was replaced in 2008 by Daniel Bellemare, Canada's assistant deputy attorney general. In April 2009, Mr. Bellemare requested that the four imprisoned Lebanese generals be released because of the "complete absence of reliable proof against them." And so they were.
Meanwhile, Lebanese investigators working on behalf of the U.N. team had re-examined cell phone records from 2005. They uncovered a network of about 20 mobile phones that had all been activated a few weeks before the attack and then silenced just afterward. This so-called second ring of phones had been calling the same phone numbers as the eight phones that coordinated the attack.
According to a report published by Der Spiegel in May 2009, investigators traced the second ring of phones to a command post of Hezbollah's military wing under the notorious Imad Mughniyeh, who had been responsible, according to U.S. intelligence assessments, for other spectacular bombing attacks, including the 1983 U.S. embassy bombing in Beirut.
But before this cell phone evidence could be further examined, the Lebanese chief investigator working on this complex network was killed in Beirut in 2009. (Mughniyeh, who might otherwise have been called as a witness, had himself been assassinated in 2008.)
In April of this year, U.N. investigators summoned 12 Hezbollah members and supporters for questioning. This spurred rumors that the Special Tribunal for Lebanon, which the U.N. set up in March 2008, was on the verge of finally issuing indictments.
The political reaction in Lebanon was fraught. Hezbollah's powerful chief, Hassan Nasrallah, said ominously in July that Hezbollah would not stand by idly if its members are accused of involvement in the assassination. He also denounced what he called attempts to "politicize" the tribunal—as if political consideration could be omitted from political crime.
Nasrallah then moved to discredit the U.N. by saying that its investigators come from "intelligence services closely linked to the Israeli Mossad." He demanded the establishment of a Lebanese committee to investigate "false witnesses." In September 2010 he went further, claiming that Hezbollah had "evidence" that Israel was behind the assassination. Syria, for its part, is claiming to be the victim of planted evidence.
Sadly, if the agents of Syria or Iran are finally named by the U.N.'s special tribunal, the half-decade delay in justice for Hariri's murder may be little more than prelude. Syria and Hezbollah, which both possess the power to destroy Lebanon's fragile government, will almost certainly denounce such a finding and shift the blame—as Hezbollah has already suggested—to their convenient bete noire: Israel. Such allegations and recriminations, meaningless as they may be, could drag on for another half-decade, if not longer.
Posted by Edward Jay Epstein at 10:38 AM