Role Reversal: Why TV Has Replaced Movies as Elite Entertainment 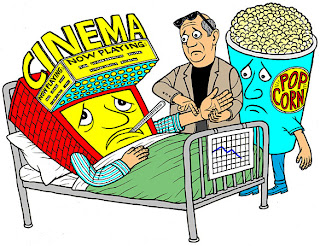 Once upon a time, over a generation ago, The television set was commonly called the “boob tube” and looked down on by elites as a purveyors of mind-numbing entertainment. Movie theaters, on the other hand, were considered a venue for, if not art, more sophisticated dramas and comedies. Not any more. The multiplexes are now primarily a venue for comic-book inspired action and fantasy movies, whereas television, especially the pay and cable channels, is increasingly becoming a venue for character-driven adult programs, such as The Wire, Mad Men, and Boardwalk Empire. This role reversal, rather than a momentary fluke, proceeds directly from the new economic realities of the entertainment business.

Consider what happened to Pay-TV. Back in the 1970s, HBO provided something home viewers could not get elsewhere: movies uninterrupted by commercials. It was, as a HBO executive put it, “the only game in town,” so its subscribers paid a monthly fee, no matter how little or often they watch it, to their local cable provider who in turn forked over a share to HBO. As the cable systems grew, so did HBO. By 2010, it had (including its Cinemax unit) over 40 million subscribers, and just the monthly fees produced cash flow of over $1.5 billion a year. Getting new movies was no problem. HBO simply licensed them from a few major studios for an exclusive period (which began a few months after they were released on video and DVD) in so-called “output deals.” To continue to harvest this immense bounty, HBO had merely to stop subscribers from ending their service.

But that feat became far more difficult as alternatives became readily available, including video stores, Netflix, and the Internet. Why should anyone pay a monthly fee to see movies on pay TV when it could get it else where cheaper and faster? The answer HBO executives found was to create its own original programming designed to appeal to the head of the house. Here it had several advantages over Hollywood. It did not need to produce a huge audience since it carries no advertising and gets paid the same fee whether or not subscribers tune in. Nor did it have to restrict edgier content to get films approved by a ratings board (there is no censorship of Pay-TV). And it did not have to structure the movie to maximize foreign sales since, unlike Hollywood, its earnings come mainly from America. As a result, HBO and the two other pay-channels, Showtime and Starz, were able to create sophisticated character-driven series such as The Wire, Sex and the City, The L Word, and The Sopranos. As this only succeeded in retaining subscribers and also achieved critical acclaim, advertising-supported cable and over-the-air network had little choice but to follow suit to avoid losing market share. The result of this competitive race to the top is the elevation of television.

Meanwhile, Hollywood went in the other direction. In the era of the studio system, the Hollywood studios opened their movies in a few dozen select first-run theaters, most of which they owned, and then, with the help of critical acclaim and favorable word-of-mouth, gradually moved them into local theaters. To accomplish this, they did not need huge advertising or print budgets. Nowadays, confronting a very different economic landscape, they open most of their major movies on 3,500 to 5,000 screens which are owned not by them but by a handful of multiplex chains. Multiplexes are in the “people-moving business,” as on multiplex owner put it, which means moving herds of movie-goers past the concession stands In return for providing their screens, these chains expect the studios to provide them with two things: first, lavishly-produced movies; second, and even more important, a national marketing campaign for each movie that will fill their multiplexes with consumers on opening weekend. Since such campaigns cost about $30 millions of dollars per movie, studios require that their marketing arm sign off on each project before it is greenlit for production. For the marketing executives, the deal-breaker is not the intrinsic merits of the film itself but the absence of the elements needed to build a marketing campaign both in America and abroad (where up to 65 percent of the revenue comes from.) Such campaigns typically require buying time on TV programs around which clusters an audience predisposed to going to the movies every weekend and then hitting it with 7 ads in the week leading up to its opening weekend. The target audience that fits this bill is tweens and teens, which are also the groups with the greatest propensity to consume popcorn and soda.
The least risky way to find movies that lend themselves to campaigns around which a global marketing can be built is to copy the movies for which marketing campaigns have succeeded in driving the requisite audience into the multiplexes; hence, the profusion of comic book-based movies and their sequels. In addition, studios must take into account that their movies must play in overseas markets, such as Korea, Japan, China, Russia, and Brazil, where visual action takes precedence over sophisticated dialogue. So the dumbing-down of movies is no accident.
Its after all show business.
Posted by Edward Jay Epstein at 11:37 AM