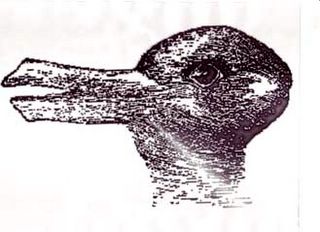 Rabbit or Duck?
In response to my last web-log entry (January 31) about the six movie studios’ secret revenue data, I received an out-of-the-blue email from an extremely well-respected antitrust economist (a man who, because he once worked for the movie industry, prefers to remain anonymous), who asks, "Has this data-sharing relationship ever been questioned by authorities?" He goes on to note: "US antitrust officials generally look at such scenarios with a suspicious eye. . . . Generally, when competitors share sensitive business data--without disclosing these data to the public (analysts or public at large)--there needs to be some procompetitive purpose, such as enforcing safety standards. Absent such procompetitive justifications, such scenarios are usually investigated for any evidence of cartel behavior."

The secret data about markets is not the only information the six studios share. They also conveniently use the same private market researcher, the National Research Group (NRG), which supplies each of its clients with a weekly "Competitive Positioning" report. As is explained in more detail in my book The Big Picture: The New Logic of Money and Power in Hollywood, from the report’s breakdown of upcoming movies’ relative appeal to different age, sex, and ethnic groups, studios can see how their films are likely to fare against competing films appealing to the same audience groups. Studios can then coordinate their films’ release dates to avoid competing for the same all-important opening-weekend audience.
To be fair, even if, as Adam Smith famously said, "people of the same trade seldom meet together, even for merriment and diversion, but the conversation ends in a conspiracy against the public," data sharing is not necessarily anticompetitive. It depends, as the Department of Justice and Federal Trade Commission Antitrust Guidelines for Collaborations Among Competitors assert, on just what kind of information is being shared:

"The Agencies recognize that the sharing of information among competitors may be procompetitive and is often reasonably necessary to achieve the procompetitive benefits of certain collaborations; for example, sharing certain technology, know-how, or other intellectual property may be essential to achieve the procompetitive benefits of an R&D collaboration. Nevertheless, in some cases, the sharing of information related to a market in which the collaboration operates or in which the participants are actual or potential competitors may increase the likelihood of collusion on matters such as price, output, or other competitively sensitive variables. The competitive concern depends on the nature of the information shared" (pp. 15-16).

Anticompetitive collusion or procompetitive collaboration? Like the famous "Rabbit or Duck" illusion, it’s all in the eye of the beholder– and in this case, the Bush Administration is the beholder who counts. Given the current climate of acquiescence to corporate cooperation, it seems extremely unlikely that the sharing of secret data by Hollywood’s sexopoly will be a candidate for investigation anytime soon.

Indeed, in another regard, the six studios may themselves be victims of a restraint of trade by what is today the country’s greatest monopsony: Wal-Mart. Wal-Mart, which writes the single biggest check to Hollywood each year for videos and DVDs (which it both rents and sells), has told the studios, according to one top studio executive, that if they dare to move up the release date of their movies on Pay-Per-View to compete with Wal-Mart’s rental business, they do so at the risk of losing critical shelf space in the giant retailer’s stores. For more on this possible monopsony stranglehold--and the man who might break it– see the answer to the Question of the Day on my website today.