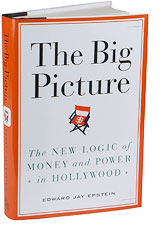 My book has finally made it to the book stores. What is it about? The Big Picture is neither pro nor anti Hollywood: it is a demystification of it. The thesis, as perverse as it may sound, is that there is an underlying logic to today’s multibillion-dollar entertainment economy--and that those who run the industry understand it

The gross misunderstanding most people have about Hollywood proceeds from the assumption that the business is about making movies. Once upon a time, it was: as late as 1948, two-thirds of Americans went to the movies every week and the tickets they bought accounted for virtually all of Hollywood's profits. But the lights blinked out in that universe more than half a century ago, obliterated by the bright blue glow of television.


Today, the big picture is very different. On an average night about 4 million Americans go to the movies, while more than 260 million Americans stay home to watch something-- a program, video, DVD-- on television. Hollywood may continue to pay lip service to its ever-diminishing audience of moviegoers, but it now makes its real money from the home audience. To tighten their grip on it, the studios gradually extended their domain over the entire television industry. All six broadcast networks and most of the commercial cable channels are now owned by the corporate parents of the six big studios-- new Hollywood's sexopoly -- and the studios make most, if not all their money, from that captive home audience. As far as the studios are concerned, the main function of the remaining moviegoing audience-- barely ten percent of the population-- is to help establish a movie in the public’s mind for the all-important home market. To get it, they go after that part of it they can most efficiently find. Happily for the studios, the audience that has proved easiest to find (because they’re home watching TV), lasso (with a barrage of 30-seconds ads) and herd to the multiplexes for big opening weekends is also the primary audience for videos, merchandising tie-ins, and character-driven video games: teenagers. As a result, people under 21 now make up over 62 percent of habitual moviegoers.

Not surprisingly, the creative decisions of the sexopoly are largely driven by the economic necessity of capturing the home audience. But that is not the whole story. There is also a social logic involving awards, prestige, star worship, publicity-mongering, power, and even the impulse to make a work of art, which, though less tangible, also informs the Big Picture.