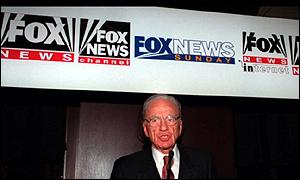 Rupert Murdoch, who revolutionized British journalism in 1986 by moving his four newspapers in the middle of the night from Fleet Street– London’s newspaper center for over 100 years– to Wapping in the docklands ( crushing two powerful unions in the process), is not a man to do things in small measure. He currently controls, among other things, a major movie studio (Twentieth Century Fox), a television network (Fox Television), 30 cable channels (including Fox News, FX, and Fox Sports), and an armada of satellites that beam movies, sports, and programs to television sets on five continents.
Business Week reports that he is ordering 20 million Tivo-type Digital Video Recorders. Does he now plan to revolutionize the way the world gets its movies on television? For Murdoch’s radical strategy, see the answer to my Question of the Day (Today)