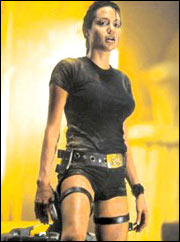 The Tomb Raider
Today, like every Monday, newspapers ritualistically published the week’s box-office grosses as if it were important news. Once upon a time, when Hollywood studios owned the theaters and carted away locked boxes of cash from them, these box-office numbers meant something. Nowadays, as dazzling as the "boffo, " "socko," and "near-record" figures may still seem to the media, their main import is to help further a gross misunderstanding about the real business of the New Hollywood. That misunderstanding takes at least three different forms.
First, the box-office results seriously confuse outsiders about who earns what. The reported "grosses" are not those of the studios but those of the independently owned movie houses. The movie houses take these sums, keep their share (or what they claim is their share)--which, along with the so-called "house allowance," can amount to over 50 of the original box-office total--and remit the balance to the studios’ distribution arms, which then deduct the out-of-pocket expenses involved in marketing the movies.
Consider, for example, Disney’s action "success" Gone in 60 Seconds, which had a "boffo" $242-million box-office gross. From this impressive take, the theaters kept $129.8 million, and remitted the balance to Disney’s distribution arm, Buena Vista. After paying mandatory trade dues to the MPAA, Buena Vista was left with $101.6 million. From this sum, it repaid the marketing expenses that had been advanced– $13 million for prints so the film could have a wide release; $10.2 million for the insurance, local taxes, custom clearances, and other logistical expenses; and $67.4 million for advertising. So what remained of the nearly quarter-billion-dollar reported "gross" was a paltry $11 million. (And that did not include the $103.3 million that Disney had paid to make the movie in the first place .)

Second, box-office results primarily reflect neither the appeal of the actual movies–nor their quality–but the number of screens on which they are playing and the efficacy of the ad campaign in getting people to go to these theaters. If a movie opens on 30 screens, there is obviously no way it can achieve the results of a movie opening on 3,000 screens. And how do studios motivate millions of moviegoers–mainly under 25–to go to 3,000 screens on an opening weekend to see a film no one else has yet seen and recommended? With a successful advertising campaign. Studios spend $20-30 million on TV ads because their market research shows that those ads are what can create its crucial opening-weekend teenage audience. To do that, they typically blitz their target audience, aiming to hit each viewer with 5 to 8 30-second ads in the two weeks prior to a movie’s opening. If the ads fail to trigger the right response, the film usually "bombs," in Variety’s hyperbolic judgment; if the ads succeed, the film is rewarded with "boffo" box-office numbers.

Third, and most important, the gross "news" confuses the feat of buying an audience with that of making a profit. Last year (2003), the cost of prints and advertising for the opening of a studio film in America totaled, on average, $39 million, which was $18.4 million more per film than studios recovered from box-office receipts. In other words, it cost more in prints and ads--not even counting the actual costs of making the film--to lure an audience into theaters than the studio got back. So while a "boffo" box-office gross might look good in a Variety headline, it might also signify a boffo loss.
Ironically, what is obscured by the media’s relentless fixation on box-office grosses is the true genius of the New Hollywood: its profitable takeover of the much more lucrative global home- entertainment economy. Disney’s corporate earnings, for example, soared fifty percent in the first half of 2004 despite an almost unbroken string of box-office failures, including Hidalgo and The Lady Killers in March, Home on the Range and The Alamo in April, Raising Helen in May, and Around the World in 80 Days and King Arthur in June. What were Disney’s real money spinners: think ABC, The Disney Channel, ESPN, Disneyland and (still) Mickey Mouse.

Movies, of course, are still part of the big picture–and always will be–but the true art of Hollywood is, more and more, the art of the deal, not the picture. And unlike the ubiquitous box-office numbers, the mechanisms of the deal--involving government subsidies, tax shelters and artful presales–rarely appear on the public’s radar. Even underlying the otherwise silly Paramount movie Lara Croft: Tomb Raider is a minor masterpiece of a deal. To see how Paramount raked in $87 million through financial alchemy before it even green-lighted that film, see the answer to my Question of the Day. For a fuller account of how and why Hollywood keeps its audience in the dark, see my coming book The Big Picture: The New Logic of Money and Power in Hollywood.