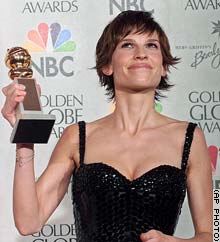 Hilary Swank
Since my new book concerns the social as well as economic logic of Hollywood, I tivo-ed the Golden Globes Awards last night on NBC. If this star-wrangling informational did not exist, NBC might have had to invent it to compete with ABC’s Oscar Awards. Fortunately, for NBC, an otherwise obscure group calling itself the Hollywood Foreign Press Association (HFPA) had invented this award-ceremony in 1944 during a free lunch in the 20th Century Fox commissary. Although its dozen or so "members" were mainly refugees in the Land of Nod (as Sam Spiegel called LA). The German occupation of their homelands had made most of them correspondents without a country, but they loved movies. At this point, Twentieth-Century Fox’s ingenious studio head Darryl F. Zanuck saw that they offered a highly-valued product in Hollywood: awards for studio movies. Since the Academy of Arts & Sciences had passed over his studio's Song Of Bernadette for the "Best Picture" Oscar in 1943), why not accept the "Best Picture" award-- as well as Best Director" and Best Actress-- from the Hollywood Foreign Press Association (although the "association" had not yet put together enough money to design the "Golden Globes.") So, with a little largesse from the studios, another annual Award ceremony-- and opportunity for product placement-- was born.

In short order, the HFPA came up with a slew of other awards that appealed to studio chiefs: "Best Film for Promoting International Good Will," "Best Film Promoting International Understanding," "Best Non-Professional Acting," "Hollywood Citizen Award," "Ambassador of Good Will," and a special award for "Furthering the Influence of the Screen" (which went to the Hindustani version of Disney's Bambi.) With them, it promoted lavish dinners at celebrity hangouts including Ciro's, the Coconut Grove and the polo lounge of the Beverly Hills Hotel.
For a while, it was run by Swedish twin brothers; Gustav and Bertil Unger, who were tap dancers. Gustave wore his monocle in his right eye, Bertil in his left. Reportedly, they picked winners on the basis of who they could get to show up.

But despite the fun, the enterprising group only began to make real money when Ted Turner elected to televise its informational in the 1980s, a gig taken over by NBC in 1996 (which paid the HFPA roughly $3 million a year for the broadcast rights.)

Nowadays it is of no matter that the 82 members who vote the awards are mostly free-lance writers and photographers with day jobs or that they have little, if any, connection with the Hollywood community. As the Hollywood Reporter observed "The studios couldn't care less whether the awards are decided by isolated Benedictine monks in the Himalayas or angels on high, at least not since the Globes have evolved into a tremendous marketing tool." As such, it offer scripted speeches by stars, promotional clips from movies, and nostalgic eulogies to some 20 million viewers. And by this time the value of public self-congratulation has become so inculcated in the Hollywood culture that one producer carpingly complained to me, "These ceremonies have taken over our social life. Almost every week we get into our formal gear, push through a gauntlet of paparazzi to get to some ballroom, give ourselves awards for everything from movies to lifetime achievements, and then applaud ourselves." Nevertheless, Hollywood’s star troopers suited up last night for yet another black-tie award ceremonies. All part of the Big Picture.