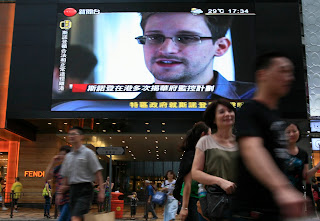 In March 2013, when Edward Snowden sought a job with Booz Allen Hamilton at a National Security Agency facility in Hawaii, he signed the requisite classified-information agreements and would have been made well aware of the law regarding communications intelligence.


Section 798 of the United States Code makes is a very tough law when it come to communications intelligence. It makes it a federal crime if a person “knowingly and willfully communicates, furnishes, transmits, or otherwise makes available to an unauthorized person, or publishes, or uses in any manner prejudicial to the safety or interest of the United States” any classified information concerning communication intelligence. It is indeed so severe that no one working at the NSA has taken misappropriated any classified documents from an NSA facility up until Snowden’s penetration.

According to Glenn Greenwald, the journalist through which Snowden released classified documents to The Guardian, Snowden took “literally thousands” of documents that constituted “basically the instruction manual” of the methods that the NSA uses for intercepting communications. Snowden did not accidently stumble on this trove of classified data. He took a position with Booz Allen Hamilton in March 2012 so he could gain access to this super-secret communications intelligence. After working there for about two months, and systematically misappropriating the data, he escaped with it to Hong Kong and told the South China Morning Post , “My position with Booz Allen Hamilton granted me access to lists of machines all over the world the NSA hacked, that is why I accepted that position.” In short, Snowden’s penetration was planned to get classified data from the NSA, and his flight to Hong Kong, where he was joined by Greenwald and others, was planned so that he could publish part of these misappropriated documents

My question would be, then: Was he alone in this enterprise to misappropriate communications intelligence?

Before taking the job in Hawaii, Snowden was in contact with three people who would later help arrange the publication of the material he purloined– Greenwald, filmmaker Laura Poitras, and Washington Post Journalist Barton Gellman. Two of these individuals, Greenwald and Poitras, were on the Board of the Freedom of the Press Foundation that, among other things, funds WikiLeaks

In January 2013, according to the Washington Post, Mr. Snowden requested that Poitras get an encryption key for Skype so that they could have a secure channel over which to communicate.

In February, he made a similar request to Greenwald, providing him with a step-by-step video on how to set up encrypted communications.

On May 16th, Snowden made an extraordinary offer to Gellman, According to Gellman, Snowden (using the cryptonynm, Verax) offered to 41 slides of a secret NSA power-point presentation of a covert operation if the Washington Post would also publish on its website a “cryptographic key” so Snowden could prove to an unnamed foreign embassy he was the source of the document leak. Although Gellman turned down this curious demand, it suggests that Snowden either was in contact with, or planned to be, with a foreign embassy in May.

On May 20, three months into his job, Snowden falsely claimed to his employer that he needed treatment for epilepsy. The purpose of the cover story was to conceal his escape to Hong Kong, where the operation to steal U.S. secrets would be brought to fruition.

Greenwald and Poitras also flew to Hong Kong. They were later joined by Sarah Harrison, a WikiLeaks representative who works closely with Julian Assange, the WikiLeaks founder. Mr. Snowden reportedly brought the misappropriated data to Hong Kong on four laptops and a thumb drive. He gave some of the communications intelligence to Greenwald, who had arranged to publish it in the Guardian, and Snowden arranged to have Poitras make a video of him issuing a statement that would be released on the Guardian’s website. At least 3 lawyers were retained In Hong Kong to deal with the authorities.

This orchestration did not occur in a vacuum. Airfares, hotel bills and other expenses over this period had to be paid. A safe house had to be secured in Hong Kong. Lawyers had to be retained, and safe passage to Moscow—a trip on which Snowden was accompanied by WikiLeaks’ Sarah Harrison—had to be organized.

The world now knows that the misappropriation of U.S. communications intelligence began appearing in the Guardian and other publications on June 5, and Snowden left Hong Kong for the Moscow airport on June 21. A question that remains to be answered: Who, if anyone, aided and abetted this well-planned theft of U.S. secrets?

Posted by Edward Jay Epstein at 9:46 AM