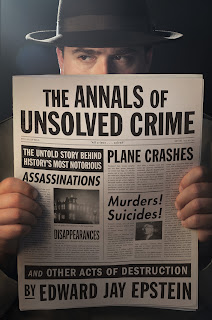 By Charles Raw (1992)
1.   One of the greatest unsolved crimes of the modern era proceeds from the bizarre hanging under Blackfriars Bridge in London in 1982 of "God's banker," Roberto Calvi, so called because he invested the Vatican's funds. The Vatican bank later discovered a hole in its accounts that swallowed up a large part of the Vatican's available funds. As the investigation into Calvi's death deepened, it opened a Pandora's box of machinations involving the Banco Ambrosiano, which Calvi headed; a Masonic Lodge in Italy that was allegedly planning a coup d'état; the Mafia and even the CIA. Enter Charles Raw, a star reporter on the (London) Sunday Times. He devoted more than nine years untangling the threads, following a trail that led him to anonymous corporations in Latin America and Europe, and revealed that nearly a quarter of a billion dollars had been siphoned from accounts controlled by the Vatican. Even without solving the crime, Raw provides a fascinating tour of the offshore banking world and a surfeit of individuals with a plausible motive for murder. In doing so, he demonstrates that an unsolved crime can offer an extraordinary education in the dark side of finance.
Blood and Fire
By John Marquis (2005)

2.   Murder can be an especially murky business when it involves a member of the royal family. During World War II, Britain sent the Duke of Windsor, who had abdicated as king, to the Bahamas, partly out of concern over his connections in Germany. There he was made governor-general and befriended Harry Oakes, a gold miner who was by far the richest man in the Bahamas. When, on the night of July 7, 1943, Oakes was murdered in his bed, the duke moved to stifle the case by imposing press censorship and by bringing in two unsavory police detectives from Miami. The investigators proceeded to frame Oakes's son-in-law, an innocent man who was ultimately acquitted. That left an unsolved crime for local newspaperman John Marquis to write this superb book about. Marquis brilliantly reconstructs the murder, the investigation and the royal coverup. He makes a powerful case that the Duke of Windsor had to close the case quickly to prevent the FBI from uncovering his own involvement in Oakes's illicit money transfers. It would have made a great plot for a James Bond novel, but, in Marquis's skillful hands, it makes an even better nonfiction thriller.

3. On Feb. 28, 1986, at 11:21 p.m., Swedish Prime Minister Olof Palme was fatally shot while walking toward a Stockholm subway station. Other than his wife, who was also wounded, there were no witnesses. The assassin jogged away, and the murder weapon was never found. A somewhat deranged homeless man was convicted of the crime but later acquitted for lack of physical evidence. With the case remaining open, no fewer than 130 people falsely confessed (a phenomenon that turns out to be anything but rare in such cases). Jan Bondeson, a doctor, scientist and investigator of unsolved mysteries, has written an extraordinarily penetrating book on the case, complete with a vivid minute-by-minute account of the crime as well as a detailed description of the failed police investigation and, best of all, a keen analysis of the byzantine political and financial intrigues in which Palme had been involved.

White Mischief
By James Fox (1982)
4.   As in the best crime fiction, James Fox masterfully illuminates not only a crime but also the social milieu in which it occurred. On Jan. 24, 1941, the 22nd Earl of Erroll was found shot to death in his Buick on a lonely road in the British colony of Kenya. No weapon was recovered, and no one was found who saw the shooting. The prime suspect, Sir Jock Delves Broughton, was assumed to have a motive because he had been cuckolded by the earl. He was arrested and tried but acquitted for lack of evidence. Fox, schooled in investigative reporting at the (London) Sunday Times, opens "White Mischief" à la Agatha Christie, by noting that "there were many people in Kenya who had a motive for killing Erroll, and many who had the opportunity that night." He then uses the earl's murder as a vehicle for exploring the philandering, debauchery, adultery and other intrigues of the wealthy, titled colonials known as the "Happy Valley set." Though he doesn't solve the Erroll's crime, he brilliantly chronicles the decline and fall of this upper-class society. As in fiction, this story of wife-swapping, drug parties and betrayals can have only one ending—a murder.
Jack the Ripper—CSI: Whitechapel
By Paul Begg and John Bennett (2012)
5.   Over 100 books have been written about Jack the Ripper, even though there is not a shred of evidence identifying the man who murdered several London women in 1888. Indeed, much of the lore about him, including his name, is likely fictitious, the products of a circulation war among the British tabloids. (Editors were not above generating scoops by publishing, if not writing, hoax letters about Jack.) Nor was there any physical evidence, since when the attacks occurred, London police were not yet using forensic tools such as fingerprint, blood and hair identification. All that is really known as fact is that six or seven London prostitutes were brutally killed in a similar manner in the Whitechapel area. Paul Begg and John Bennett's book greatly clarifies the mystery with a detailed reconstruction of each murder, featuring both photographs and computer-generated renderings of the historic crime scenes. Begg, a "Ripperologist" for more than 40 years, and Bennett, a researcher in the history of the East End of London, bring new life to what may be the ultimate cold case.

A version of this article appeared June 1, 2013, on page C10 in the U.S. edition of The Wall Street Journal, with the headline: Edward Jay Epstein.