The Skeleton in the Papal Closet 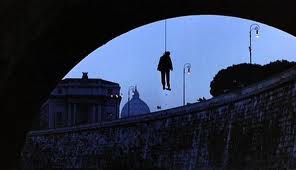 On June 5th 2012, financial police in Piacenza, Italy searched the home of Ettore Gotti Tedeschi, who was the target of a money laundering investigation. Until just a few weeks earlier, he had headed the Pope's
secretive organization for dealing with the world of Mammon, called not without irony the “Institute for Works Religious,” since it operates as an off-shore bank that is beyond the laws and regulations of Italy, the European Union, or any other authority. The raid uncovered a secret dossier that included 47 binders of Vatican documents, some of which exposed the Vatican Bank’s loopholes for laundering money, arrangements for discreet accounts, and a note instructing that these documents be delivered to a designated  lawyer and the media if anything foul happened to Tedeschi. As it was reported in the Italian press, he had feared for his life because some of the secret accounts serviced individuals in the Mafia and other criminal organizations.

Thirty years earlier, the body of Roberto Calvi, known as “God’s Banker” because of his work for the Vatican bank, had been found hanging under Blackfriars bridge in London, a well-organized murder that was never solved. Also missing was a half-billion dollars siphoned through the Vatican bank to anonymous corporations owned by unknown parties.And no one found at that time the documents in Calvi’s attaché case, which more than a half decade later were used to blackmail the Pope for $40 million. (Only $2 million was paid to the blackmailers by the Vatican Bank before the police moved in.)

The secret at the heart of these crimes, as it is brilliantly adumbrated in Francis Ford Coppola’s The Godfather Part III , was and remains that the Vatican is desperately short of money, and has been for more than a century. It was so impoverished after the First World War that it borrowed $100,000 from a
bank to pay for the funeral of Pope Benedict XV. It had priceless art and church properties, but it could not sell them, nor did Dioceses abroad provide funds. All it had was the meager revenue from the sale of postage stamps and the annual Peter’s Pence collection boxes in churches. In light of its dire financial situation, it had no choice but accept in 1929 a settlement with the government of Benito Mussolini, which provided it with $91.4 million in cash and bonds. That sum at prevailing interest rates did not
yield enough income to pay the Vatican’s expenses, so, to get a high return,  the Popes used the Vatican’s sovereign status to set up a no-holds-barred offshore bank under the guise of the “Institute For Religious Work.” As its President Archbishop Paul Marcinkus told me, after he moved to full-fledged money laundering in the Bahamas, “You can’t run the church on Hail Marys alone.” Unfortunately, in the banking scandal following the death of God’s Banker, the Vatican bank lost a large part of its capital.

The new Pope Francis is clearly a well-intentioned man. But all his austerity measures, personnel changes, and efforts at transparency will do little to change its century-old insolvency problem. Now, more than ever, the Vatican needs money.
Join me for an online video Q&A to discuss the skeletons in the papal closet– , including the murder of God’s banker, the blackmailing of the Popes, the money laundering train, and the other Vatican scandals, this Tuesday, 5 PM EST via Shindig. It’s free, but you need to register here.

You can also register here for my future online Q&As about DSK, Amanda Knox,Alexander Litvinenko, and the Lindbergh Kidnapping.