Who Runs Libya: A Profusion of Names 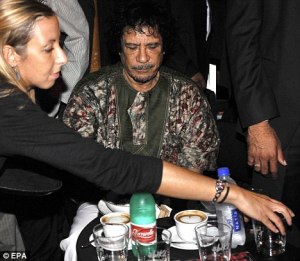 Does anyone know who is the head of the so-called Great Socialist People's Libyan Arab Jamahiriya– or even if the first letter of his surname name is A, E, G, K, or Q?

Can this be a single person, or some kind of transliteration junta? And what is his–or their– job in the Great Socialist People's Libyan Arab Jamahiriya (which means “masses” in Arabic)? CNN calls him “President,” the Boston Globe calls him “strongman,” the Sun (London) call him “dictator,” the Daily Mirror calls him “Mad Dog,” while the CIA factbook, somewhat understatedly, says that he “holds no official title, but is de facto chief of state.” Can Any (other than his voluptuous Ukranian nurse) clarify this issue?
Posted by Edward Jay Epstein at 9:31 AM