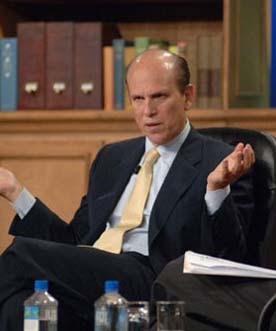 Michael Milken, the financier who revolutionized corporate finance in the 1980s, based his entire concept of junk bonds, on what he claimed was a "fundamental flaw" in Wall Street’s financial structure: the trust it had in the ability of three ratings services– Standard & Poor’s, s Moody's and Fitch Ratings– to evaluate the relative risk of bonds. Since SEC rules prevented anyone else from supplying bond ratings, these rating services had (and still have) what is tantamount to a global monopoly on issuing bond ratings. When one or more of these services give a triple-A rating to a corporate bond, it certifies that there is virtually no risk of default, This seal of approval allows Wall Street underwriters to sell them to insurance companies, pension plans, college endowments, and other institutions, many of which are restricted by regulations from buying bonds with a lower rating that triple-A. In other words rating services determined which corporations are eligible for institutional bond financing.
When I interviewed Michael Milken back in 1987, he railed against the rating services, zeroing-in on Triple-A rated banks such as Citibank. His scathing analysis went as follows: "What is a bank?" he asked rhetorically. "It is nothing more than a bunch of loans." " How safe are these loans?" he continued.
"They are made mainly to three groups that may never repay them in a real
economic crisis-- home owners, farmers and consumers of big ticket items." "What
guarantees these loans?" "Very little since these banks usually have $100 in loans
for every dollar of equity." He pointed out that a number of states such as California required that all home loans be non-recourse loans, which means that the only collateral is the home itself (making them little better than what would later be called sub-prime mortgages.) "Yet,their bonds get a triple-A ratings from the bond rating services." ne continued. "This is crazy" because rating services measure "the past not the future" risk.
Soon afterwards, the financial establishment trounced on Milken. Faced with endless litigation. He pled guilty to the five counts of financial transgression, and went to prison for 22 months. But his downfall did not answer the critical issues he raised about the rating services.
That was two decades ago. Since then the rating services have extended their
Triple A ratings to debt packages, such as Collateral Debt Obligations (CDOs) that
included subprime mortgages and other questionable loans. Since they get much
higher fees for rating complex debt pools than for plain vanilla corporate bonds,
this expansion into CDOs has proved incredibly lucrative for them. Moody's,
which is partly owned by Warren Buffet’s Berkshire Hathaway, raked in over $3
billion in fees from 2002 until 2006 for providing these ratings. Standard &
Poor's meanwhile escalated this race into the abyss in 2000 by extending
their top ratings to "piggy-backed" CD0s. Appropriately named, piggy-backed CDOs multiplied leverage by allowing buyers to simultaneously take out a second loan to finance the first CDO. The logic was that if the initial loan was Triple A, and there could not default, so was the "piggy-back" based on it. Other rating services followed suit, so as not to lose the rich piggy-back rating business to Standard and Poor’s. The result that CDOs were leveraged over and over again, while maintaining the triple-A rating that made
them appear to be almost as safe as a Treasury bond.
Of course, there is an obvious conflict of interest in this enterprise: the rating services are paid by the companies who issue the securities they rate. Moreover, the rating services admit in their fine print that their ratings are based on the data supplied by the companies seeking the ratings. Nevertheless, wheelers and dealers in Wall Street, London, Dubai, and other financial ports of call so leverage these rated CDOs to such an extent that by late 2008 an estimated 18 trillion dollars in marketable debt hung over what remained of the global financial markets. As we all know now. the ratings proved to be wildly out of touch with reality, and the subsequent collapse of the house of cards built upon them, sapped the global financial system of the crucial confidence necessary for it to function..
If Milken’s critique of the rating services had been taken more seriously
in 1987, we might not now be staring into this back hole today,
Posted by Edward Jay Epstein at 10:46 AM