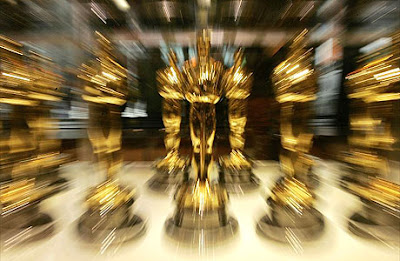 The 81 th Academy Awards, with its scripted speeches by stars, tearful acceptances, eulogies to the rich and the dead, red-carpet celebrity fashion show, and gold-dipped statuettes, has the same mission that it did when Louis B. Mayer convinced the other studio moguls to create the event in 1927 to: "establish the industry in the public's mind as a respectable institution." Now, televised by ABC in dazzling high-definition color, the evening-long informational will further the long-standing myth that Hollywood is in the business of making great—and original—movies.
This illusion, like all successful deceptions, requires misdirecting the audience's attention from reality of how Hollywood makes its money to a few brilliant aberrations. Take this year's Best Picture nominations: Milk, Frost/Nixon , The Curious Case of Benjamin Button ,The Reader , and Slumdog Millionaire . What all of these films have in common is that they have virtually little to do with the real business of the Hollywood studios, which is global openings on 3000 or more screen of youth-oriented movies that, after a few weeks in the multiplexes, can be mass marketed on DVDs. For the Hollywood elite to choose these atypically adult movies as a public display of its virtue is as absurd as the music industry giving its grammy awards to Mozart, Bach, and Verdim or international oil companies presenting awards to avant-garde artists who happen to paint in crude. While Hollywood studios, or their wholly-owned "independent" subsidiaries occasionally make or distribute artistic and social-commentary films, their principal business is no longer about making movies. It is about creating properties—including TV programs, cartoons, videos, and games—that can serve as licensing platforms for a multitude of markets.
The confusion proceeds from the fact that for the first 20 years of the Academy Awards, the movie business was entirely about movies. In those days nearly two-thirds of Americans went to a movie in an average week, and all the studios' earnings came from the proceeds of the tickets sold at movie houses. But that was before the advent of television in the late 1940s. Once people could watch sports, game shows, and movies at home for free, most of the habitual audience disappeared. By the late 1970s, U.S. movie theaters, which had sold 4.8 billion tickets in 1948, sold only 1 billion. Hollywood, on the verge of financial ruin, had little choice but reinvent itself.
The studios simply followed their audiences home. To do this, they first repackaged the movies shown at theaters Pied Piper-style by making movies that visually appealed mainly to children and teenagers and then recycled them into home products, including DVDs, TV shows, games, and toys, which, in 2008, produced some 80 percent of their revenues. In this business model, alas, art, literary, and social-commentary movies are marginalized, since they cannot be either turned into licensing franchises or used to lure huge opening-week audiences to theaters. And, as satisfying as these more artistic films may be to directors, writers, actors, and producers, they do not lend themselves to sequels, prequels, or other licensable properties. They do, however, perform one function very well: acting as decoys at Hollywood's annual celebration of itself.
Posted by Edward Jay Epstein at 11:19 AM