The Blur Between Fact And Fiction 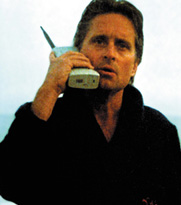 Michael Douglass
Can the New York Times distinguish fact from fiction any longer?

Consider a front page story today (May 20,2005) stating "Just as corporate raiders represented the Wall Street of the 1980's (think of Gordon Gekko) and mutual fund managers were the icons of the 90's (Jeffrey N. Vinik, who ran the Fidelity Magellan fund, was a minor celebrity), the lawyers who keep companies in compliance with increasingly tough regulatory laws have become a new prototype of the financial district." Unlike Jeffrey Vinik, however, Gekko is not a real person. Played by Michael Douglas in the 1987 movie Wall Street, he is a fictional creation of writer-director Oliver Stone. Stone, himself a master of the art of blending fact and fiction in movies, say he modeled the character after Ivan Boesky. That may be true, but Boesky was not a corporate raider. He was a crooked money manager, who bought inside information for cash, traded illegally on these secrets, and went to prison for it.

The New York Times reporter, Jennifer Steinhauer, may have been innocently misled into thinking Gordon Gekko was a real corporate raider by CNN’s program Moneyline which repeatedly used a film clip in the 1990s from the movie in which an immaculately dressed Gordon Gekko (Michael Douglas) intones "Greed is good" to illustrate news reports of corporate corruption. Moneyline's decision to use such fictional clip for its news coverage was, appropriately, part of an even bigger greed-is-good corporate deal in which Warner Brothers (which produced Wall Street) paid CNN (which was acquired by its corporate parent from Turner Entertainment ) to hype the licensing values of its movies. The result, as is demonstrated by the New York Times, is that fictional images such as Gekko come to stand for real events.