Rise Of The Tube Moguls 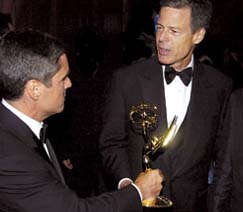 The ascendency of the tube moguls should not come as a surprise– at least not to readers of The Big Picture. What used to be the movie business, centered in "movie houses," has been transformed into the home-entertainment business, centered around TV sets. Old Hollywood studios–prior to 1948– owned or controlled movie houses; New Hollywood studios– or their corporate parents– own or control television outlets. In fact, they own all six broadcast networks in America, almost all the principal cable networks in America, and most of the Pay-TV channels in America.

Underlying this transformation is a singular reality: most of the adult population no longer goes to the movies on a regular basis. As late as 1948, over two-thirds of Americans went to the movies weekly. Now barely 10 percent of Americans go in an average week (and, even in this sliver of the population, most of the frequent movie-goers are teenagers.) Where did the audience go? On any given night, over 90 percent of the American population is at home watching something on a television set. Naturally, Hollywood followed that mass audience home.

The numbers, which I reveal in Table 1 of The Big Picture, tell the story: ticket sales from theaters, which had provided all the studio revenues in 1948, provided less than 20 percent of the studios’ revenues in 2003 . Instead, home entertainment– including television, Pay-TV, DVD, and videos– provided more than 82 percent of the studios' revenues . Further, whereas as the high costs of print and advertising eat away most, if not all, of theatrical revenues, the studios retain the lion's share of the home entertainment revenues.
These lucrative home entertainment earnings have transformed the way Hollywood operates. Theatrical releases, despite the blinding allure they hold for the media, now serve essentially as launching platforms for its products for the home market, much like the runways at money-losing fashion shows establish brands for downstream consumer markets.

With New Hollywood's takeover of the television now all but complete-- see my X-Ray of the 6 major studios' media holdings-- the line of succession now runs to the gatekeepers of its El Dorado: the tube executives