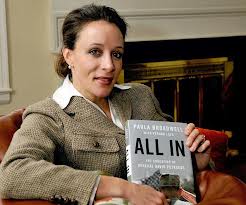 Before we can walk the cat back, and establish a chronology of a possible penetration, we need to answer the following ten questions?


1. When and where did the sexual liaison between Paula Broadwell begin? Was it before, during, or after the FBI conducted its mandatory background check on General Petraeus in 2011?

2. When did General Petraeus, who was authorized to access top secret documents, and Paula Broadwell, collaborate to set up anonymous gmail accounts and exchange passwords to them? For what period, were these “drop boxes” to evade a US intelligence surveillance of internet providers through the device of storing drafts of unsent emails?

3. It is reported that Paula Broadwell, a former military intelligence officer, under pseudonym “KelleyPatrol” sent an email to General John Allen, the former deputy to General Petraeus in Tampa, warning him that Gilberte Khawam Kelley was a “seductress.” If so, what date was this warning to General Allen sent?

4. It is further reported General Allen, who exchanged 20,000 to 30,000 pages of emails with Kelley, told Kelley of the anonymous warning. If so, what date did this occur?

5. It is reported Kelley consulted a friend in the Tampa FBI field office in May 2012, What was exact date? Was it after she received news of the warning from General Allen?

6. When did the FBI determine “drop boxes” were being used by Paula Broadwell?

7. The FBI reportedly obtained a warrant by showing show probable cause of a crime to search the anonymous accounts. If this was a FISA (Foreign Intelligence Surveillance Act) warrant, what crime did the FBI allege it was investigating? What date did it obtained this warrant?

8. When was General Petraeus told by FBI it was investigating anonymous gmail accounts? Was it done through the FBI liaison with the CIA?

9. When did FBI determine Paula Broadwell was in possession of classified date on her commuter?

Posted by Edward Jay Epstein at 11:31 AM