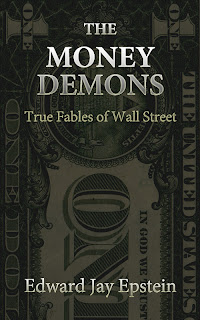 It is not for everyone, include the happy horde of well-intentioned protesters who have encamped themselves today in lower Manhattan and the Brooklyn Bridge to “Occupy Wall Street.” But their protest, and its coverage, indicates the extent to which American pop culture prefers to lay the blame for the economic malaise on the greedy money demons of Wall Street. After all, after the 2008 crunch, many people can no longer borrow money to live beyond their means, So some guilty demon must be found, and one obvious candidate is Goldman Sachs, which made billions in profits by trading pieces of paper called derivatives while others suffered losses. Of course, Goldman did not act alone. It was part of a complex global system used by the Fed and other central banks to manipulate interest rates, print money, stimulate economic activities, and fund government debt. The financial alchemy called securitization through which debt is transformed into salable securities, an integral part of this system, produced, among other illusions of wealth, the sub-prime bubble. So the central banks must also be deemed part of the demonic equation.


Despite its popularity in the media and among politicians, not everyone buys into this organized flight from reality. For those who don’t. I offer my new book, The Money Demons: True Fables of Wall Street. It includes essays on such (unpopular) subjects as the Ahabian hunt for the Giant Vampire Squid (Goldman), Mike Milken, The Central Bankers’ Club in Basle, the Yale Endowment Fund, and the criminalization of high finance in Hollywood movies.

(For further details, see http://amzn.to/oBmUKz).
Posted by Edward Jay Epstein at 11:13 AM