The Secret Numbers Behind The MGM Fiasco 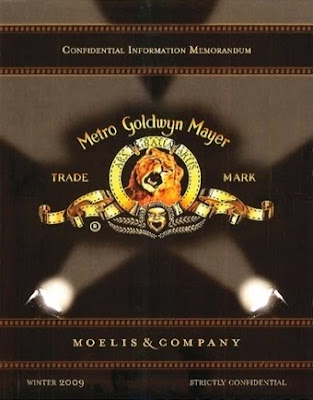 MGM, once the shiniest studio in the Hollywood galaxy, has fallen on hard times. Last October it failed to make the interest payment due on its $3.7 billion debt, and even with the six month forbearance granted by its creditors, it is hovering the threshold of bankruptcy. Its equity investors — including three big hedge funds — have been all but wiped out. The 140 banks that financed the leveraged part of the leveraged buyout deal are in danger of losing over $3 billion. With the creditors demanding their money, and the clock running on its forbearance, MGM had put itself up for sale, retaining investment bankers Moelis & Company to solicit offers from potential buyers that were due in mid January 2010. For a movie studio that was bought for $4.85 billion in 2004 (which is over $5 billion in 2010 dollars), the bids that have come in so far are shockingly low. Time Warner, for example, is offering under $2 billion and the bid from Lionsgate, once the leading contender, is worth even less.

The secret numbers in the confidential information memorandum sent out by Moelis explain the problem, which goes to the root of what is happening to the movie business today. MGM's main asset, as is true in the case of all Hollywood studios, is its library comprised of 4,100 film titles, including all the James Bond movies, and 10,600 television episodes. The money that comes in through this library comes from DVD sales — mainly older titles sold in discount bins at Wal-Mart and other retailers -– and television licensing packages to Pay TV, cable networks, and television stations around the world.

The bet that the hedge funds made when they put up most of the equity for the $4.85 billion LBO in 2004 was that DVD revenue from the library would hugely increase when people replaced their standard DVDs with the Blu-Ray high-definition format that was just being introduced. But their projections proved to be pipe dreams. Instead of expanding, MGM's DVD revenue plummeted, according to the confidential memo. MGM's DVD revenues fell from $394.7 million in 2008 to just $69.8 million in the 2010 fiscal year (which ends March 31).This huge drop was attributed to a host of factors, ranging from the worldwide downturn in DVD sales to fewer new MGM releases. What turned out to be the real killer for MGM's library was what the memo termed "significant price erosion." Wal-Mart, pressured by competition from Netflix, Red Box, and video downloading, drastically reduced the "price point" that it would buy older (or so-called "catalogue") DVDs, driving prices down to less than $5 a copy. So studios' saw the stream of profits from older DVDs wither away.As with other studios, the larger part of MGM's library's money comes from television licensing. At first glance, these revenues appear remarkably stable, declining a mere one percent from $535.1 million in 2008 to $529 million in 2010. But like other phenomena in Hollywood, appearances can be deceptive. MGM had structured its long-term licensing contracts so the cable networks wind up underpaying for the early years and overpaying for the later ones, which is a common practice at studio libraries. As a result, even as properties lose value over the course of the contract (old films are worth less than newer ones), the illusion of stability is maintained . Of course, when MGM renews these multi-year contracts, the money it gets will drop precipitously.And as impressive as $529 million in revenues may seem, it is not the amount MGM actually gets to keep since it must split these proceeds with various "third parties," including producers, stars, directors, writers and Hollywood guilds. For example, the revenues from the 24 James Bond movies — which are the library's most valuable asset generating nearly 30% of its revenue — have to be split 50-50 with Danjaq LLC, the holding company for the Broccoli family that originally created the franchise. These participations and residuals (which is what the guilds get for their pension funds) totaled $235.2 million in 2010. In addition, there were $33.2 million in other expenses, such as calculating and issuing more than 15,000 different checks per quarter to participants.MGM also had to pay Fox a fee of $22.2 million for distributing its DVDs. What MGM kept turned out to be not enough to pay its overhead — $135.9 million in 2010 — and other costs, leaving it with a negative operating cash flow of $52.4 million. The bottom line here is that MGM cannot pay off its $3.7 billion in debt. And even if a white knight gallops in to carry off the library, the investors and creditors will take a bath.
Posted by Edward Jay Epstein at 6:30 PM