Buffet Versus The Hedge Funds 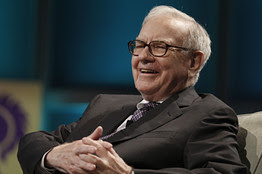 Warren Buffet’s holding company, Berkshire-Hathaway, finally released its numbers on Saturday (February 28, 2009) which showed that it had the largest decline in its book value in its history. But even before this bad news was announced, hedge funds were massively shorting not Berkshire Hathaway itself but the publicly-traded companies in its $50 billion portfolio. Their bet was that Buffet would be forced to dump the stock of these companies was based largely on his vulnerability to massive losses on derivative contracts, including credit default swaps. It turns out that even while Buffet was denouncing derivative contracts as "financial weapons of mass destruction" and " time bombs", he was amassing one of the world’s largest position in them. For example, he sold derivative contracts on four stock market indexes– the S&P 500 in America, the FTSE 100 in the U.K., the Dow Jones Euro Stats 50 index in Europe and the Nikkei 225 Stock Average in Japan– for $4.9 billion that expose his company to over $35 billion in losses. In 2008 alone these contracts had lost on paper nearly $10 billion and with the market in free fall in 2009, they lost another $3 billion. Indeed, each percent these indexes decrease adds another $350 million to the loss Berkshire Hathaway is liable for. He also sold more than $2/4 billion worth of the infamous credit default swaps, not unlike the ones that brought AIG down once it lost its triple A rating. Such contracts insure that companies will not default on their debt. In addition, Berkshire Hathaway subsidiaries sold derivative contracts on energy for "operational purposes."
Although even the multi-billion dollar paper losses on these derivatives don’t require Berkshire Hathaway to put up money to guarantee payment to its counterparts, they weaken its balance sheet. And since Buffet prides himself on maintaining a "Gibraltar-like financial position," the hedge funds are gambling Buffet will protect Berkshire Hathaway balance sheet– and its triple A rating– by selling part of Berkshire Hathaway’s portfolio. If that happens, they expect to profit in their short sales from the plummeting prices. Whether or not their play succeeds against Buffet, remains to be seen.