Who's Who At The Polonium Party 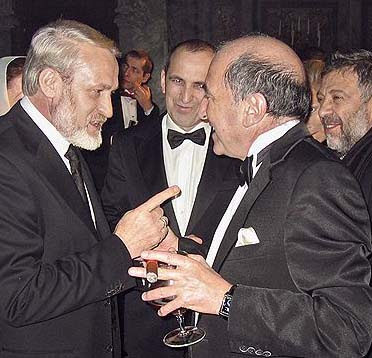 Berezovsky (cigar) and Zakayev, January 23,2006
Boris Berezovsky held his 60th black-tie birthday party at Blenheim Palace, Winston Churchill's birthplace. In the center of the room was an ice sculpture representing St. Basil's Cathedral on Red Square, coated with black caviar. At one table was Alexander Litvinenko, Andrei Lugovoi, and Akhmed Zakayev. They all had been born in the former Soviet Union and they had all been in prison. Ten months later, they all had another connection: Polonium-210.

The Polonium Players
In this deadly game, you need a program

Position: Financier and Revolutionary-in-exile
Polonium Link: Detected on his office furniture and fax machine.
Litvinenko Link: Employer
Dossier: Born in 1946, Berezovsky made an immense fortune in the 1990s in Russia. He acquired stakes in the national airline Aeroflot, the major automobile manufacturer, key oil companies and set up his own bank to transfer funds around the world. He also bought control of newspapers and television networks, including the powerful ORT channel. After Boris Yeltsen was re-elected in 1996 with Berezovsky's support, he appointed Berezovsky both deputy secretary of the National Security Council and Secretary of the Organization for Coordinating the Commonwealth of Independent States (CIS), which qualified him for protection by the Kremlin's Ninth Directorate of the FSB, the successor to the KGB. After Putin came to power in 2000, Berezovsky lost his political power base. He came under criminal investigation for diverting hundreds of millions of dollars from Aeroflot and faced indictment. He fled Russia to his villa in the French Riviera, he was arrested in there on a Russian warrant. After his release, he moved to Britain, which granted him political asylum. Among his political activities in London, he funded anti-Putin exiles, including Alexander Litvinenko. Berezovsky's stated goal was to overthrow the Putin regime, explaining in a 2007 interview with The Guardian,"It isn't possible to change this [Putin] regime through democratic means. There can be no change without force, pressure." Asked by the reporter if he was effectively fomenting a revolution, he said: "You are absolutely correct."
Status: Target of a Russian extradition warrant. On trial in absentia for fraud in Moscow


Position: KGB Defector, Author
Polonium Link: It killed him.
Berezovsky Link: Protector(Russia), Political advisor (UK)
Dossier: Born in 1962, Litvinenko spent most, if not all ,of his career in the intelligence game. In 1986, he served in KGB military counterintelligence. In the Chechen rebellion in the late 1980s, he recruited KGB sources in Chechnya. In 1991, the KGB was renamed the FSB, and he worked in its newly-created Department for the Analysis of Criminal Organizations . His duties included the surveillance and penetration of Russian organized crime. In 1998, he was put in charge of protecting Berezovsky. In 1999, after Litvinenko charged that the FSB planned to assassinate Berezovsky, Litvinenko was fired from the FSB and accused of stealing munitions. With any trial, he was imprisoned. In 2000, he was released on condition that he remain in Russia (and surrender his passport). He then fled to Turkey on a false passport under the alias "Chris Reid." From Turkey, he went to Chechnya . According to Russian officials, his mission in Chechnya in 2000 was "to eliminate evidence of Boris Berezovsky's involvement in funding illegal armed groups there." Berezovsky, for his part, denied illicit channeling money to separationists. Whatever the purpose of Litvinenko's work in Chechnya, he rejoined Berezovsky in London on November 1, 2000, where he received political asylum. With Berezovsky’s backing, he worked ceaselessly to discredit Putin as a sponsor of state terrorism. His book Blowing Up Russia alleged that Putin’s FSB, not Chechen separationists, had blown up six Russian apartment houses in 1999, and that the Chechens were framed for the death of some 300 residents in those buildings. He said that Putin's motive was to create the pretext for re-invading Chechnya. His book Gang From Lubyanka claimed that Putin was deeply involved in Russian organized crime. In interviews he alleged that the 2002 seizure of a Moscow theater by Chechen women was organized by "FSB agents among the Chechens" and accused Putin of personally ordering the assassination of journalist Anna Politkovskaya. He eveb alleged that Putin’s FSB had trained Bin laden’s partner in 9-11, Ayman al-Zawahiri, for half of a year in Dagestan in 1998. Litvinenko may also been involved with Berezovsky a less-public activities According to Vyacheslav Zharko, a Russian official who alleges that MI6 recruited him in 2003, Litvinenko and Berezovsky acted as access agents for MI-6. Under the pretext of a meeting with British businessmen, they introduced him to three MI6 officers– "John Callaghan," "Kenn Philips," and "Paul" –who then recruited him as a spy. Andrei Lugovoi, a former Russian security officer, tells a similar story, saying that Litvinenko brought him to meetings in October 2006 with British businessmen who openly attempted to recruit him as a spy for MI-6. If so, Litvinenko was acting as an access agent for MI6 about the time he came in contact with the Polonium 210.
After his death, Polonium 210 was detected in his home and on his clothes.
Status: Died November 23, 2006


Position: security expert
Polonium Link: Polonium 210 was detected on him, as well as his wife, children and possessions.
Berezovsky Link: Protector in Moscow
Litvinenko Link: Prospective business partner
Dossier: Born in Azerbaijan in 1966, Lugovoi enrolled in the KGB at the age of 21. During the Yeltsen administration, when the KGB became the FSB, he worked at the Kremlin's personal security unit, where he met Berezovsky. In 1996, he left the FSB to head security at Berezovsky’s television fiefdom, ORT, . After Berezovsky fled Russia in 2000, Nikolai Glushkov, his top associate in Aeroflot war arrested and put under pressure to provide evidence against Berezovsky. Lugovoi had the task of breaking Glushkov out of prison but the escape went awry and Lugovoi served 14 months in prison. After he was released, he set up Pershin, which provided security services to multimillionaires and sold beverages. When he went to London for Berezovsky's gala birthday party on January 23, 2006, he was seated at the same table with Litvinenko, who he had known from the KGB and FSB. Several months later, according to Lugovoi, Litvinenko asked him to come to London to discuss a lucrative joint venture with British businessmen. In the summer he met Litvinenko at his home who gave him documents and "gifts" to bring back to Moscow. The material later tested positive for Polonium 210. indicating that Litvinko (and Lugovoi) were in contact with Polonium 210 four to six months before Litvinenko died. As the deal progressed, Lugovoi and his Moscow associate Dmitry Kovtun met Litvinenko at Erinys, a British security firm. During that meeting, the British participants, according to Lugovoi, tried to recruit him as source for information about the FSB, leading him and Kovtin to assume that they were MI6 officers . The offices of Erinys later tested positive for Polonium-210. Lugovoi last met Litvinenko on November 1st at the Pine Bar.
Status: Subject of a British extradition warrant

Position: Consultant
Polonium Link: Detected in his body, in his hotel room, in his Hamburg residence.
Berezovsky Link: Business prospect.
Dossier: Born in 1966, Kovtun graduated from the elite Supreme Soviet Military Command School in 1985. He then served in military intelligence in Eastern Europe, posted in Prague and Berlin, in the final days of the Cold war . From 1991 until 2003, he lived in Hamburg, Germany, eventually marrying a German national, Marina Wall, and working as a "consultant". After 12 years in Germany, he returned to Moscow (without his wife) in 2003 and, continued a consulting career in "oil and gas." Lugovoi, who had known him since they were in school, suggested he come to London to participate in Litvinenko's "joint venture". Kovtun accompanied Lugovoi to the October 16 meeting at Erinys. On October 28, he flew to Hamburg to extend his residence permit The permit, his residence, and ex-wife later tested positive for Polonium 210, indicating that he was contaminated after the October 16th meeting. On November 1, he again saw Litvinenko at the Pine Bar.
Status: Subject of German investigation into Polonium smuggling. 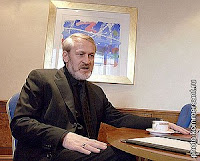 
Position: Chechen leader. Foreign Affairs Minister of the Chechen Republic (exiled in London)
Polonium Link: Detected on front seat of his car
Berezovsky Link: Ally, attended his 60th Birthday party
Litvinenko Link: Appointed Litvinenko in 2002 to the Commission on " war crimes committed on the territory of Chechnya by the Russian occupying troops."
Dossier: Born April 1956 in Kazakhstan, Zakayev first achieved stardom as an actor at the Grozny theater. In 1990, after Chechnya seceded from Russia, he was appointed its Minister of Culture. After Russia re-invaded Chechnya, Zakayev first fought with the rebels and then went into exile in Denmark, where he was arrested on a Russian warrant. He then went to Britain, where he receive political asylum. He met Litvinenko in London in 2003, and kept, as he stated in his deposition, "in constant contact" with him. At 6 pm on November 1st, Zakayev picked up Litvinenko from Boris Berezovsky's Mayfair office, where Litvinenko had gone after his meeting at the Pine Bar, and drove him home.
Status: Subject of Russian extradition warrant


Position: Security Consultant
Polonium Link: Contaminated, hospitalized
Litvinenko Link: Source on KGB penetration of Italy
Dossier: Born in 1970 in Naples, Scaramella went to work in 2002 as an advisor to Italy’s Mitrokhin Commission which was investigation allegations of KGB recruitment of Italian politicians. After Scaramella paid Litvinenko to provide information about KGB/FSB operations in 2005, he met again with him around lunchtime on November 1 at the Itsu Sushi. After that meeting (and before Litvinenko proceeded to his meeting with Lugovoi at the Pine Bar), Scaramella was contaminated by Polonium.
Status: In Prison on unrelated charge of calumny

[See Theories Below]
Posted by Edward Jay Epstein at 5:29 PM