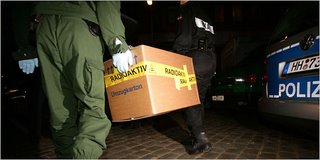 At least a dozen people have been contaminated by the rare radioactive isotope Polonium 210. The list includes Alexander Litvinenko, the ex-Lieutenant Colonel in the KGB who died from a dose of Polonium 210 in London on November 23rd; Andrei Lugovoi, a former colleague of Litvinenko in the KGB, who met with Litvinenko at the Pine bar of the Millennium Hotel in London the day he became ill, November 1st; Dmitry Kovtun, Lugovoi’s business associate, who also attended that November 1st meetings; 7 employees of the Millennium Hotel; Mario Scaramella, an Italian security consultant, who dined with Litvinenko on November 1st at the Itsu Sushi Restaurant on November 1st (and whom, one week later, Litvinenko accused of poisoning him); and Litvinenko’s Russian wife Marina, who went with him to Barnet General Hospital on November 1st. In addition, tell-tale traces of the same Polonium 210 were detected at Litvinenko’s home and hospital, Lugovoi and Kovtun’s rooms at three luxury hotels they stayed at in London in October and November– the Parkes, Sheraton Park Lane, and Millennium Hotel; a security firm in London called Erinys, where Litvinenko, Lugovoi and Kotvun met on several occasions, a residence in Hamburg, Germany that Kotvun had visited en route to London, two British Airways planes on which Lugovoi flew from Moscow to London in October. and in the offices of billionaire Russian exile Boris Berezovsky. So the trail of the Polonium 210 followed in the steps of three men, Litvinenko, Lugovoi and Kovtun, who were involved in the fall of 2006 in some dealing that required Lugovoi and Kotvun flying back and forth from Moscow.
As Polonium 210 has not been manufactured in Britain for years, and it cannot be stockpiled for long– its half-life is 132 days– the Polonium 210 must have been smuggled into the country. If it is assumed that no one intended to leave a radioactive trail in airplanes, hotel rooms, or homes, or contaminate waiters and other innocent bystanders, there must have been some unintentional leakage of the smuggled Polonium 210 . Moreover, we know from the Hamburg trail of Polonium that the leakage was occuring October 28th, well before Litvinenko went into the hospital on November 1st. But where did the smuggled Polonium 210 come from?

Polonium 210 is made by bombarding bismuth with neutrons from U-235 (the fuel for atom bombs)in nuclear reactors . Not only is its distribution tightly controlled, but it is very rare. According to Wikepedia, " Only about 100 grams are produced each year.". Virtually all of known production– less than 4 ounces– comes from Russian nuclear reactors/ To keep it from leaking onto the black market, the United States made an arrangement with Russia to import almost all of its production to America. In the US, under tight controls, the Polonium 210 is embedded in plastic or ceramic so it can be safely used in static eliminators. To recapture the Polonium 210 in any toxic qantity would require acquiring over 15,000 static eliminators and using highly-sophisticated extraction technology. Such a large scale acquisition would instantly be noticed.

The reason that the US has gone to such lengths to control Polonium 210 is that if a rogue nation (or terrorist group) obtained access to any quantity of it– even a half-gram– it could use it as an initiator for setting off the chain reaction of a nuclear bomb. For that purpose, the bomb-makers would also have to have a fissile fuel, such as U-235, and Beryllium (which is mixed in layers with the Polonium 210). Even lacking these other ingredients, the Polonium 210, which aerosolizes at about 55 degrees Centigrade, could be used with conventional explosives to make a dirty bomb. So if pure Polonium 210 was smuggled into Britain– as British intelligence now believes– it is of considerable concern. At minimum, it means that there has been a diversion of Polonium 210 from the controlled supply. But where is the leak?
Only four facilities are licensed to handle Polonium 210 in Russia: Moscow State University; Techsnabexport, the state-controlled uranium export agency; the Federal Nuclear Center in Samara; and Nuclon, a private company. Although these licensees are monitored by the Russian government, it would not necessarily require an intelligence service to divert part of the supply into private hands. A single employee who was bribed, blackmailed or otherwise motivated conceivably could filch a pinhead quantity of Polonium 210 and smuggled it out in a glass vial (in which its alpha particles would be undetectable. Such corruption is not unknown in Russia. Or the diversion could have come from outside Russia. A number of other countries with nuclear reactors have been suspected of clandestinely producing (or buying) Polonium 210, including Iran (where it was detected by IAEA inspectors in 2000), North Korea (where it was detected by US airborne sampling), Israel (where several scientists died from accidental leaks of it in the 1950s and 1960s), Pakistan, and China. But whatever its source, the Polonium diversion has serious implications. For one thing, it could be sold to a country that wanted to set off a nuclear device, clean or dirty. So it might be worth a great deal of money on the black market.

Before the mystery of how Litvinenko came in fatal contact with a dose of Polonium 210 can be solved, the relationships he had with his contaminated associates may have to be unravelled. For example:

1. What was the relationship between Litvinenko and Mario Scaramella? According to Scaramella, Litvinenko told him at their November 1st sushi lunch that before he had defected from Russia, his activities had included the "smuggling of nuclear material out of Russia." If true, why did the ex-KGB officer broach the subject of nuclear smuggling?

2. What was the relationship between Litvinenko and Lugovoi. According to Lugovoi, the two former KGB officers, met "12 or 13 times" in London to discuss business, and, in between these meetings he returned to Moscow. In between their meetings in late October, Litvinenko made a quick trip to Israel while Lugovoi’s associate Kovtun flew to Germany. Was this international travel related to their business?

3. What was the relationship between Boris Berezovsky and Litvinenko and Lugovoi? Litvinenko had reportedly been on his payroll in London since his defection in 2000; Lugovoi had helped organize his security in Moscow in the 1990s. His London offices showed traces of Polonium 210. Did Lugovoi and Litvinenko meet with him?
Posted by Edward Jay Epstein at 3:44 PM