Puffing Up The 911 Commission 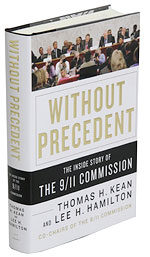 In July 2004, the National Commission on Terrorist Attacks Upon the United States, popularly known as the 9/11 Commission, published its final report. Coming in the midst of the presidential campaign, it won the quick endorsement of both candidates and wide acceptance in the media. In "Without Precedent," the commission's co-chairmen, Thomas Kean and Lee Hamilton, offer an inside account of their investigation of the 9/11 tragedy.
The book's title is somewhat of a misnomer. There were of course dozens of precedents for high-level bipartisan inquiries, such as the Warren Commission's investigation of the JFK assassination. More to the point, there was a precedent for the investigation of the 9/11 attack: the Joint Inquiry by the House Permanent Select Committee on Intelligence and the Senate Select Committee on Intelligence. Indeed, the 9/11 Commission was required to use the Joint Inquiry's report as its starting point and to limit itself to fill in what that report had not already covered.

The most notable difference between these two investigations was their public relations -- or, in Messrs. Kean and Hamilton's apt phrase, their "public face." The co-chairmen assumed that it was vital to be perceived "as having full access to the most secretive material in the government."
To build this impression, they recount in the book how they prevailed in their battle for information with a secretive Bush administration, an evasive military bureaucracy and recalcitrant New York City officials. They also had to cultivate the media. So both chairmen appeared on the TV talk shows, gave joint press interviews and did everything possible to build an aura of openness around the investigation -- hoping to avoid, as they explained, "the kinds of conspiracy theorizing that have followed in the wake of other inquiries."

For the commission to succeed, Messrs. Kean and Hamilton had to nurture the impression that the commissioners had seen all the evidence regarding 9/11 and had independently assessed it

In reality, however, the 9/11 Commission was neither exhaustive nor independent. If the investigation had truly been as exhaustive as advertised, it would have made a genuine effort to weigh evidence that ran counter to its thesis. But it did not. Consider how the 9/11 Commission dealt with Capt. Scott Phillpott, a high-ranking naval intelligence officer who asserted that through data mining his military intelligence unit, code-named Able Danger, had identified Mohamed Atta as a potential terrorist in 2000 and even had his photograph on a chart.

Since the staff could not find any such chart in the documents that it had obtained from the Pentagon, and because Capt. Phillpott's account "failed to match up" with the staff's conclusion that Atta was unknown to U.S. intelligence prior to 9/11, this putative identification of Atta was omitted from the commission's report (and a number of commissioners were not informed about it).
Later, the Pentagon said that at least four other intelligence officers in the unit had confirmed that they had seen the photograph of Atta or recalled hearing Atta's name prior to 9/11. The Pentagon also explained one possible reason the chart with Atta's photo was missing: The military had destroyed many Able Danger records in 2001. To be sure, there were reasons to be skeptical about eye-witness accounts, but an exhaustive investigation would have at least heard them.

Nor was the 9/11 Commission able to independently evaluate or verify crucial information it received from intelligence agencies. Although the CIA had imprisoned seven al Qaeda conspirators who had planned, directed and coordinated the 9/11 attack, the agency refused to give the commission access to the prisoners. In the case of the Warren Commission, Chief Justice Earl Warren went to Jack Ruby's prison cell to personally question Oswald's killer. In the case of the 9/11 Commission, the commissioners were not allowed to speak to, see or know the whereabouts of conspirators. The commission could not even question the prisoners' CIA interrogators about the way information had been obtained from them.

The co-chairmen admit in "Without Precedent" that they "had no way of evaluating the credibility of detainee information." But apparently that did not discourage them from accepting, essentially at face value, information from the prisoners, delivered via a CIA "project manager," if it would fill in gaps in the commission's investigation.

For example, the CIA reported that one key prisoner, Ramzi Binalshibh, had said co-conspirator Atta "did not meet with anyone" when he went to Prague in June 2000 -- even though Binalshibh himself was not in Prague and had no first-hand knowledge. He further alleged that on another two journeys, Atta went to Spain solely to talk with him and met no other conspirator -- but Binalshibh was not in Spain during all of Atta's visits. And, again through the medium of the CIA project manager, Binalshibh informed commissioners that Osama bin Laden would not have allowed Atta to meet with an Iraqi intelligence officer because the al Qaeda leader was upset with Saddam Hussein's treatment of Muslims.
Even though such contributions were indeed unverifiable -- particularly the one that required Binalshibh to read bin Laden's mind -- the 9/11 Commission came to rely on this information, giving it the benefit of the doubt when conflicting information surfaced. For instance, the commission uncovered CIA documents that threatened to complicate matters by dragging Iran into the 9/11 conspiracy: The documents revealed that Iran had "apparently facilitated" the travel of most of the 9/11 "muscle hijackers" in flights from Afghanistan by not stamping their passports, and that Imad Mugniyar, the Hezbollah terrorist group's infamous chief of terrorist operations, had flown with the hijackers. But the commissioners merely referred the "troubling" matter to the CIA project manager.
At that point, the report was only one week away from publication. The project manager quickly ran the information past the agency's prisoners and sent a reply back "just in time for inclusion in the Report," Messrs. Kean and Hamilton write. Result: "We found no evidence that Iran or Hezbollah was aware of the planning for what later became the 9/11 attack." Such CIA feeds permitted the commission to hew to its theory that al Qaeda carried out 9/11 with no help from any outside party or government.
With this book, Messrs. Kean and Hamilton have shown how a government-appointed commission managed to create the appearance, if not the reality, of an exhaustive independent investigation and artfully transformed itself into a lobby for the reorganization of the intelligence establishment. Now that is without precedent.
Posted by Edward Jay Epstein at 4:08 PM